I read a post the other day that made me smile. It was by clever Cat Parrott over at Yellow Days in which she was talking about the gym and her ‘Mum body’. I think we all recognise the “Mum body”… kind of strong in the upper body and thighs, due to lots of lifting and carrying, and weak in the abs (and pelvic floor I would like to add), due to the tornado of unrighteous havoc wreaked on a body by pregnancy and childbirth.

Until recently I too boasted guns of steel. I could transfer multiple bags of shopping and 14Kgs of potentially un-cooperative child from the supermercado to the car without a trolley or breaking a sweat (ok, not in the summer heat) or batting an eyelid. Alas, now I am like a bird with a broken wing.

Since cracking my elbow, nearly a month ago, I have not lifted a shopping bag (nice) or my child (a little bit sad really). I can lift Bibsey up on to the loo or a chair with my left arm, but I really don’t trust clumsy myself to do anything more at the moment. If we went down, it would be Ti-tanic darling *in manner of Craig Revel-Horwood*.

Where my left arm has been compensating and getting stuck in with such things as hair brushing, tooth brushing, stirring, chopping, typing, fetching and carrying, conveying food and drink to mouth etc., my right arm has been on sick leave and has got distinctly flabby.

I suspect that it won’t much like going back to work when the time comes. It has become something of a celebrity over the last few weeks as I have escorted it around the pueblo, slinged-up in rather gorgeous scarf that I got for my birthday, and up and down the hill for ‘dressing changes’ with the local nurse (who is brilliant). There isn’t a person in our village who doesn’t know the elbow’s life story. This of course has done wonders for my Spanish, as long as all I am required to talk about is my Bingo Wing, which, in case you were wondering, doesn’t translate. 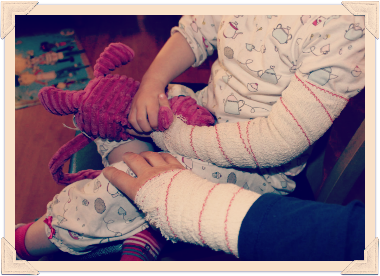 Sadly, Bibsey cuddles have mostly been a one-armed affair and, in our bed their is a huge cushion between Mr B and me, like the Berlin wall, where my arm sleeps. But things are improving and Bibs and I managed a proper hug on the sofa the other day which was scrumptious. I nearly blubbed when she said to me “Mummy, put your bad arm around me”. Aww, god bless her little Gruffalo socks.

She has also been cultivating a sympathetic bad arm which we have had much fun strapping up with spare bandage donated to us by the nurse. I suspect that Father Christmas will be bringing a certain little person a medical kit this year.

More good news is that I won’t be blogging about my celebrity Bingo Wing forever. It  just feels like it, doesn’t it?