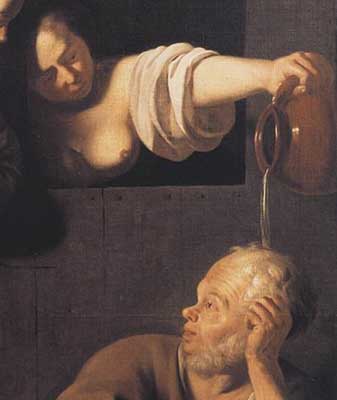 Xanthippe dousing her old man. Really, haven't we all wanted to do this at some point? Not sure why she's got her boobs out.

X is for Xanthippe.

In dim distant early April when I started the A-Z Challenge, I mentioned that I would write about xylophones when I got to the letter X. I tried, but I just can’t do it. I was boring even MYSELF. No offence to percussionists out there but I am just not qualified to expound engagingly on the subject.

Instead I am going to write about something I know – usually the best way – and that is the great Xanthippe, the young wife of Socrates, and mother of three sons. Of course I had never heard of her before I went today in search of interesting words beginning with X. But now I have found her, I think I know what she was all about.

Xanthippe was the original nagging, scolding, shrewish wife. The prototype you could say. She was a shrew of a wife. Apparently. But really, is there any better kind?

“Behind every great man there is a woman rolling her eyes”
~ Jim Carrey, Actor

Yes, that’s right, I segued from Socrates, the father of western philosophy, to Jim Carrey, the man who turned gurning into box office gold. This is just me doing my bit to make ancient greek philosophy relevant for today’s audience… yes, I did just say that*.

Anyway, this is a post in praise of Xanthippe. There is no other type of woman I would rather channel when going about my daily business.

Where men, teenagers and toddlers see a nagging shrew, I see a woman who is getting things done. For the household to continue turning on it axis, smelly socks must go in washing bins, dirty plates and cutlery should be moved in the direction of the sink or dishwasher, and t’would be better by far if toys were not left out in the rain. For offspring to thrive they must eat-up, do their homework and get to bed. For relationships to flourish communication must be gently forced upon the uncommunicative, feelings demand exploration and grievances should be aired.

I like the Xanthippe in me. She is the part of me that gets the Eponymous Bibsey (now two and very bossy with it) fed, dressed and to the child minder with snacks in her bag and bunches in her hair. And it is the Xanthippe in me that may well have also got a wash on, out and up onto the line before we get out of the door. That way the pyjamas will be clean and dry in time for bed and clean sheets will feather the love nest. Ha ha ha ha. Clean sheets? Love nest! I may be gilding the lily somewhat here, but you get my drift.

Being as I am, prone to a little laziness (see the letter L) from time to time, I need a little bit of a shrew about me for my life to work. So, the next time children will not do what they are told, or eyes glaze over while you are talking your good sense, or someone calls you a nag, just picture Xanthippe emptying the chamber pot over her husband’s head. Remember her, and feel smug in the knowledge that it is in fact you that is keeping the world going round*. Fact.

And finally, what of poor old henpecked Socrates? Why did he hitch himself to such a nag? Well, apart from the fact that she was considerably younger than him, and nicely ‘stacked’ (if the picture is anything to go by), it is said that he married her to practise his patience. And in any case

“Marry or marry not. In any case you’ll regret it”
~ Socrates, Philosopher

Are you Xanthipathic**? Which great woman from history are you channelling?

* At time of writing bloggist may have had delusions of grandeur brought on by excessive blogging, lack of food and not enough sleep.

** I think I definitely maybe made that word up.