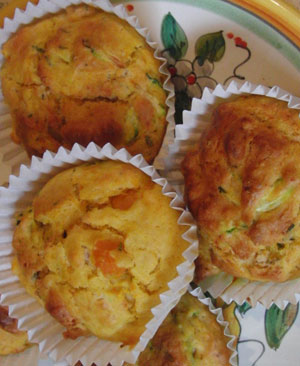 So far so muffin' good

During April, when I was in the throws of the post-a-day A-Z challenge, I wrote a To Do List. This was a list of things I was ‘to do’ when the daily blogging nonsense was over and I had a bit more time. One of the things on the list was to bake savoury muffins. I thought that it was the answer to something, not sure what. But the muffins had been on my mind.

So I made them. Here they are on your left. They look quite muffin’ good don’t they? Not so actually. I thought that they were a bit heavy and boring. And Bibsey took two bites (to her credit she gave it a go) and then she looked and me and said:

“Not working Mummy, not working”

Ha ha. If it weren’t so true and so funny, it would be quite cheeky wouldn’t it?

So what went wrong? I followed the recipe to the letter. Fresh rosemary: check. Coarsely grated courgette (my own addition): check. But erm, there was some yadda  about baking powder this and bicarbonate of soda that. Ignored that. Think self-raising should cover all eventualities don’t you. Also, what business does yogurt have in a muffin? Honey, I get, and I had, so I used it. But I won’t be doing that again. I swapped pumpkin for squash because that is what I had. And I skipped the wholemeal flour and pumpkin seed sprinkling…

So, I ask you again. What went wrong?