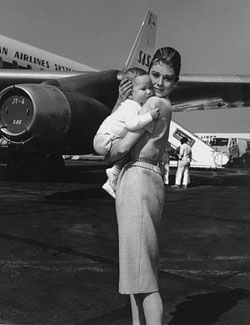 Is this the one where I write about the hellish day I had traveling from Spain to London with Bibsey unaided by Mr B? Well, I am not going to post that. Instead I am going to tell you that it was the best day of my life. And it went something like this…

I bounded out of bed feeling as fresh as a daisy and looking ten years younger, having had a full and uninterrupted night’s sleep as per.

When I suggested to Bibsey that it might be a good idea to do a poo before the flight she duly delivered a nice neat one for me in her nappy and that was that.

My darling daughter ate a full breakfast and didn’t throw any of it on the floor. She went down for an early nap which was good because it would have been a bit of a disaster if, for example, I had spent an hour (when I should have been packing) trying to get her to sleep, she had refused despite being very, very tired.

Mr B was in an unfeasibly good mood as he always is when the opportunity presents itself to take a drive down to Málaga. So I didn’t have to resort to emptying the open bottle of cava in the fridge just to stay sane and get us out of the house.

The drive to Málaga was breezy. Bibsey babbled happily and Mr B hummed a merry tune while remarking on how careful and considerate Spanish drivers are.

Check-in and security were a sail-through. We were waved to the front and I was told not to worry about removing my boots and belt as I clearly had enough on my plate holding the baby and trying to fold down the buggy. Also I imagine that years of experience and finely honed instinct led them to conclude that I was neither terrorist nor drug dealer and that a cavity search would be unnecessary.

Again, I didn’t feel the need to resort to alcohol air side because things were going so swimmingly thus far. I felt carefree and unencumbered, having managed to pack lightly and efficiently comme d’habitude.

Our plane arrived and left on the dot. Again we were waved to the front of the queue and delivered direct to a row of seats with plenty of leg room and space to spread out. Bibs did not try and lick everything insight. Neither did she rip the in-flight magazine to shreds or try to pull the hair of the man in the seat in front. She sat happily on my lap the whole way without wriggling or complaining and had a little nap. No in-flight pooey nappy changes were required.

While disembarking the plane I had no trouble whatsoever, within the confines of the cabin, in squeezing my placid daughter into the baby sling. Of course it would hardly have mattered if I had, because I in no way had to walk miles from the gate to the baggage carousel with hand luggage and babe in arms.

The buggy came off the conveyor belt in tip top condition. It would have been a real bugger if it had got damaged or jammed or something in transit because managing a suitcase, a babe AND a slightly crumpled pushchair would have been a bit of a nightmare. I was not a hot sweaty mess.

My Mum was a darling and was there waiting to take us home. Miss Bibsey was an angel all the way in the car as being strapped into yet another seat was exactly what she had in mind after seven hours travelling. Good job really because a screaming baby in the back seat might have caused my mum to get distracted and take a wrong turn and get tangled in rush hour traffic.

So, there it is. We arrived safe and sound, happy and rested…

Ha Ha. Had you going? Not really? The bit about the pre-flight poo is true. Oh, and the bit about my Mum being a darling.