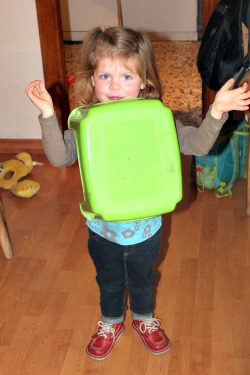 I am Shrek. Another of Bibsey’s alta egos.

A while back Bibsey went through a phase of announcing things like: “I was a rabbit once” or “I was a carrot once” and, as you might guess from the title of the post, “I was a dinosaur once”.  An identity in crisis perhaps? Or just a very good memory for previous lives? Who knows. I am sure if we asked Prof Brian Cox he would tell us that, of the three, the carrot is the least likely of the three. Isn’t that right, Bri?

Anyway, more recently there’s a clear, new message and it goes like this: “I’m a T-Rex, I’m a T-Rex, I’m a T-Rex…” to fade. We were treated to this looping announcement the other morning before we had even got out of bed and again from the bouncy castle at a friend’s kid’s birthday party. The actions that go with the announcement put me in mind of the shadow of Nosferatu on the stairs as he makes his way to bed.

If I can catch Bibsey in action on film I will post it here, but you know what they say about working with children and pre-historic animals.

So, I am the proud mummy of a T-Rex. The implications of this are far-reaching and, let’s face it, quite unlikely. The food bill is bound to rise as I suspect the appetite of one of the most voracious carnivores to ever have roamed the earth will not be satisfied with a rotating menu of scrambled eggs, pasta pesto and fish fingers.

Play dates will never be the same again. Those are very sharp teeth on a T-Rex. And Bibsey’s predatory behaviour around toys and food is the stuff of legend in these parts.

I very much suspect that my Dinochild is gonna go mussing up my furniture and my nice clean house. Yes, I said clean house. Do you want to challenge me on this? I have a pre-school dinosaur to back me up if you want to make something of it.

And looking into the future, imagine having a T-Rex for a teenager. Moody, hormonal, carnivorous, constantly hungry and misunderstood, and erm, gigantic… just a few words that spring to mind.

Oh stop the press please. A conversation with Bibsey in the car this morning started with “What’s a T-Rex Mummy?” At this p0int I give up.

This post title (though clearly not the content) was inspired by the harrowing film Once Were Warriors which I saw in 1994 at the cinema in Cairns, when I was backpacking in Australia, where cinemas and supermarkets were great places to go just for a blast of aircon.

For more blogging from A to Z click on the banner below.