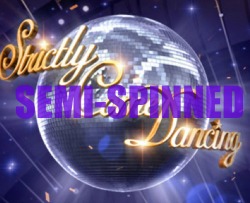 Yet more Strictly joy, people. And haven’t we done well? Week 11, the semi-finals, and we are still in the game, Bibsey and I. Still valiantly posting and giving it 100%, when we have done our chores. We’ve had a couple of stumbles here and there and have clearly lost our timing this week – how late is too late to publish a round-up of last weekend’s events? – but we come out every week fighting…

On with the show!

So, now we know. For next week’s final we quite rightly have Harry McFly-me-to-the-Moon and Aliona, who has quietly grown on me this season. Also in the final we have Little Chelsee, the natural dancer, and her Pasha. And of course, predictably, JDo (he used to have a little, now he’s got a lot) and Kristina.

First off let’s talk about the ones we that we had to set free. 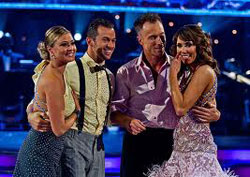 Valance and Jones released back into the wild

Jordan and Jones: The lovely Alex went out on a beautiful waltz. And she had a fair crack at the salsa too. Most improved dancer of the competition? Yes, of course… but OMG just tell the girl that she danced well. Loved James Jordan this season. I would like to see him win one day. But WHAT was he up to in Daly’s compound, gurning at the camera during Jason’s post-ATango-4×10 speech… oh, I think that I just answered my own question.

The Holly and the Russian: That was a hot Argentine Tango from Holly, but does Bruno know something that we don’t. He seemed to be at pains to let them know: “I get it”. And a groovy kind of charleston that I am not sure that I entirely loved. I didn’t much like Holly to start, but in the end she had the best attitude to the whole the competition: “the show will end, but the friendships will go on”. There was no sense of a need to win… and nobody likes needy do they, Jason?

We’re all just wild about Harry: A fabulous charleston and a ‘smoldering’ Viennese waltz. He has got the rhythm, the body, the moves. Why isn’t he getting 10s from Craig? He and Aliona have just been quietly (and by quietly I mean no griping on ITT) getting on with it all season… how can I decide between him and… 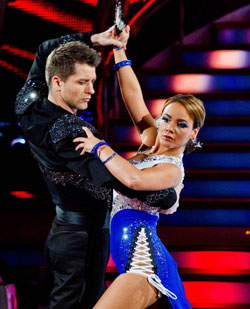 Chelsee the little corker: Was on top last week and my nephew’s favourite so I hear. She got four 10s for her paso, which was fab, but I actually thought her American smooth was better. Wouldn’t it be lovely for her to win? She really is the little princess of the dance floor. Honest dancing from the heart that she seems to produce without thinking. It doesn’t do to over-think it does it? Speaking of which…

He’s just JDo from the block: Now, let’s not Blame it on the Moonlight *wince*, but I thought his samba was a bit dad dancey… just me? And the Argentine tango looked intense, but I cannot forgive the creepy beginning when he was practically inhaling the Rihanoff candy floss hair. Yikes. And she looked positively itchy when the judges all made mention of his loss of timing – again. Still four 10s for the Tango and so many many fans… the glitter ball could be within his grasp.

Can’t wait for the show dances in Blackpool next week. I wonder if someone will go insanely over the top? What do you think? And four dances each! Ouch! That’s got to hurt somewhere, non? Do you think that they can all keep up?