Ha! When I saw this week’s Listography topic over at Kate Takes 5 I knew I had to join in, if only because her ‘sh*t-jobs-I’ve-done’ list reads a bit like mine.  So here goes: 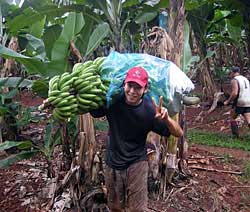 It thought I told you, I'm a humper not a hooker

1. Banana picking, Tully River, Queensland, Australia
Correction: not banana picking. Girls were not allowed to actually pick the bananas. And the act of picking – to be carried out by the men – was called humping. Yes, that’s right. The sheilas got to do an activity known as hooking. Yes, that’s right. The boys would hump and the girls would hook. Being a hooker was a hideous job which involved using a long-handled scythe to hook and chop down the dead branches from the banana trees and then clear them from the paths. My friends and I lasted four days in a living hell that started before the sun came up and finished in a mosquito infested dormitory where sleep was impossible. There was one bathroom with a shower in the hostel (run by the plantation owner’s wife) and the only place to buy food was the hostel shop which took full advantage of it’s monopoly status. 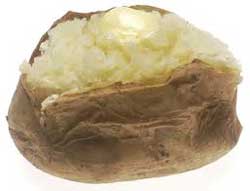 The straw that broke the camel's back

This was mostly washing-up with a dash of food prep and bunging things in the microwave. I won’t bore you too much with the dreadfulness of this job. Grim, grimy, thankless – that about covers it. What I will mention is the moment when I knew that I had to move on. My boss (a silly cow, obv) took me to task over the way that I was putting the potatoes in the microwave. It may sound reasonable or like nothing to you. The detail of this dressing-down over the potatoes, and how I might use my hands to transport them from fridge to microwave, is too depressing to recount. For me it was, as they say, the tipping point.

I am sure, like Kate there was absolutely no problem whatsoever with my attitude. I was in no way a snotty-nosed, up-myself graduate with a massive two years work experience in anything under my belt, who thought that my education on its own should mean that I never had to get my hands dirty.

3. List researcher, Conferences and Publishing outfit, Hong Kong
OK, this job really wasn’t terribly terrible, but it wasn’t great. It involved seemingly endless hours of phone calling to establish the current contact details of executives in companies across Asia who we would then bombard with our marketing brochures. A tedious job to say the least and made all the more difficult by the various language barriers. However, it was the job that lead to another job that lead to over a decade of working in the events industry. It also financed a lot of fun and frolics and was a really special time in my life. I made some of the best friends of my life in HK and of course it is where I met Mr B. 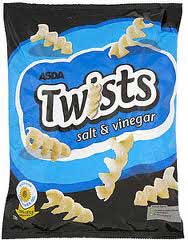 Not to be confused with 'product'

4. Assistant to a Wedding Co-ordinator, well-known one-stop-shop for brides and grooms, London
This was a temporary job and I should make it clear that I was never, ever allowed within confetti-throwing distance of an actual wedding. The worst part of the job was actually assisting the Wedding Co-ordinator. This was a woman who found co-ordinating weddings so stressful that she could not eat on most days. The only thing that she would consume were salt and vinegar Twists. She would stuff these down at a rate of knots and then wipe the salt off her hands on the back of her head. *shudders* This alone is not enough to hang her, but she was the most dreadful micro-manager and fuss-pot, mainly because she was running continually at a high-pitched ‘I can’t cope’. This is a frequency that can only be picked up by dogs and beleaguered assistants.

5. This is a bit of a cheat because it relates not to a job, but to an interview at a London tempting agency.
When I returned to London after nearly four years of traveling, living and working on the other side of the world I was in my late twenties. During this time I had held down jobs that were variously serious, menial, manual and dreadful, but I paid my way, gained invaluable experience, and grew up just a little bit (ok, not that much), and I had a ball… you know all those things that you might expect from such an adventure. I would just like to share the response from one Temping Agent (female, about the same age as me, pink and white pinstriped shirt with cufflinks) when she saw my CV.

She said “Hmmm, your traveling’s a bit of a problem isn’t it?” and went on to not find me a job being, as she was, entirely incapable of turning that negative (WTF?) into a positive.

Funnily enough, all these jobs were during my twenties – does anyone else find this to be the case? Now I’m popping over to to Kate’s to see the other entries.