There are some days in Spain when you just know that the critters are out in force.

On these days you need to watch your step, keep your eyes peeled and always check the overhead  and under loo seat situation before settling yourself for a moment. There is only one thing worse than finding yourself in mid-stream (or whatever) on the loo and realising that there is no loo roll and that is discovering that you are sitting directly under some dingly-dangly, enormous mother f*cker of a an incy wincy spider, who definitely wants to eat you, and having nowhere to run.

Today is one of those days. We have had two incidents already and it is only 10.15. The day is young and the bichos, or creapy crawlies, are many. 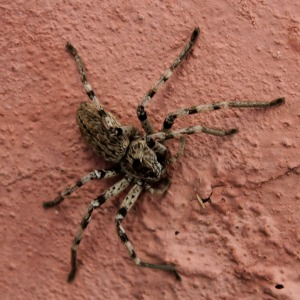 I blame the wind actually. Recently it has been whipping around the mountainside with a kind of mad ferocity that I have never experienced before. It sends kids and dogs a little bit loopy and I find it impossible to have a simple conversation or even a single thought when the wind is howling like it does here.

It has caused much destruction in its wake, the least of which was to literally rip off our garden gates, and the worst of which was to cause and spread a number of fires in the valley and on the hillsides over the weekend. High winds, dry land and arcing electricity lines proved to be a rather combustive combination. All is calm and not on fire now though thankfully.

However, the wind seems to have quite literally blown away the cobwebs and as a result made homeless an army of eight-legged beasties. Yes, I am exaggerating. It’s what I do. Don’t judge me and just take a look at this gorgeous specimen on the right. She only has seven legs actually. Wind damage maybe? 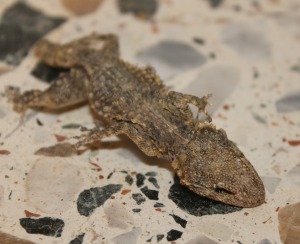 Here’s our friendly desiccated gecko corpse, we shall love him and call him Husky

The spider was not the first though. The first was the desiccated gecko corpse that fell out of Bibsey’s bedroom curtains this morning as I swept them open with a flourish to greet the new and not so windy day. Please put aside for one moment, if you can, your questions about how a gecko could remain dead and undetected in the curtains long enough to become a husk of its former self, and concentrate on the real story, which is of course about Bibsey and the gecko.

“What’s that Mummy?” she asked as it flew out of the curtains and landed like a dry leaf on the bedroom tiles “And why are its eyes so black?”. Quickly overcoming my initial irrational horror of flying reptile corpses, I was at once alive to the threat of future bedtime gecko terror and quickly explained that these little critters were our friends and this one in particular had been eating all the flies and mosquitoes in her room.

I then went on to the subject of cause of death “I suspect that the gecko died because there are not enough bugs to eat in the winter. And of course Daddy bug sprays in your room, so…” I petered out. “So, Daddy killed the gecko. Or was it you?” she finished for me.

Oh dear, that was a can of bichos that we really didn’t need to open before school. The whole episode brought up quite a few interesting questions including the very current and most important pet question. As she left for school Bibsey announced “I’m going to have a gecko for a pet Daddy, and it is going to live in my bedroom and eat all the mosquitoes and it is going to love me”.

There will be more on the subject of pets later I suspect. I remain on full alert today as I know that the beasties do not just come in twos.

In the meantime I am reminded of that scene in Finding Nemo where Dory wants to keep a jellyfish as a pet. Here it is. Have a good day y’all and don’t forget to check under the loo seat!