Now that she is five she is at school from 9am until 4pm everyday. She has had her first solo playdate in the pueblo with a boy from school. She tells me that they fight “but not hitting”. OK, great. They mostly play Barbies.

Many more playdates have followed. I started writing this post about a year ago. 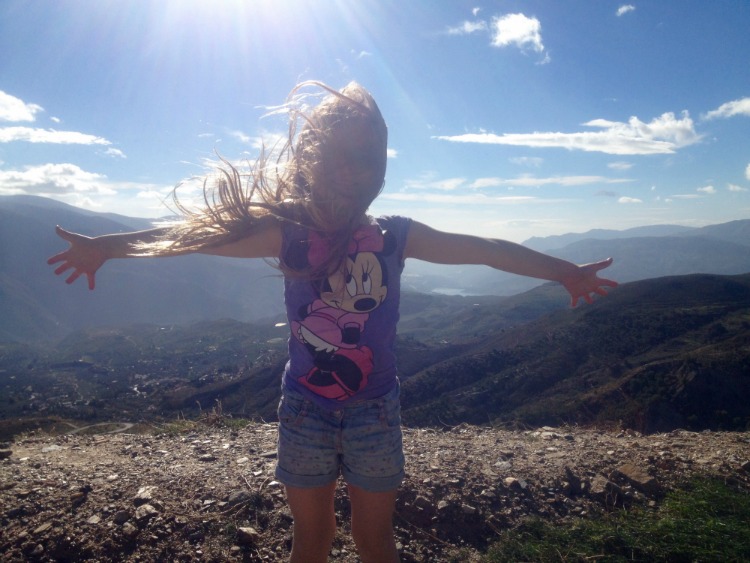 Now that she is five she will sit on the loo in the morning and ask about God, who is a man of course claro (I guess I messed that one up as some important formative stage). She will also explain to me how poo and wee works, according to her bestie at school. Now, there’s a whole anatomical tangle that I am going to have to unravel at a later date along with a load of other bodily business that will need to be explained.

Now that she is five she will take Daddy by the hand and tell him “go on, kiss her” when he and Mummy are being grumpy with each other.

Now that she is five she speaks Spanish. Yup, it’s all at once the cutest and the most bizarre thing for a parent to experience; watching your child grow-up bi-lingual, when you yourself have to drag the Spanish sentences, kicking and screaming, from your brain and out of your mouth.

Now that she is five she has a mind of her own (always had, actually) and a will that is hard to deny. Bedtimes are mostly peaceful and cosy these days, but when they are bad… oh. Getting dressed in the morning can be like dressing a princess one day and the next, a boggart.

Now that she is five she still likes to get in bed for a cuddle in the mornings, and she will still give me a kiss at the school gate.

***Now that she is five I still can’t get to grips with the Saints’ days and holidays. I was the ONLY mother delivering a child to school on Friday, which was Cristo. The only witnesses to this faux pas were two old men and a child, yet somehow the word is out. I have been gently reminded of some upcoming responsibilities by no less then three thoughtful people who must imagine that if I didn’t get the note about Cristo then I also didn’t get the note about picking up school reports on Monday after school. And they were right. The notes of course were to be found in the deepest recesses of the school backpack mochila.

[***Whole preceding para only makes sense if I had published at time of writing. Did I mention that I started writing this post a year ago?]

Now that she is five, nearly six, I have looked back over this blog and laughed and smiled and decided to keep going. Because I might have something to say again and the energy to say it.

I haven’t written anything here in so long, and before that I had slowed down to almost nothing anyway. Normally I tried to avoid explaining myself here because, really, write or don’t write, nobody minds except for me (or perhaps my Mum who thought that she might have been dropped from the distribution list because she hadn’t seen any posts for so long), just don’t obsess about it on the blog for all the great big onion to see, right?

But I am going to explain myself, just a bit, and for one person in particular. I started this when Bibsey was a baby to record her growing up. And a little bit because: ‘bloggers’ egomania’. Yuh. That.

I hoped that it would be something we or she could look back on one day and laugh at and enjoy. But now there is a gap and I don’t want her to think that it was because we had a gap. We didn’t.

But I was elsewhere channeling myself into activities of a more bread and butter variety. And of course Motherhood is tough and I didn’t always feel like writing about it.

So, that’s it. I am quietly sneaking in at the back.