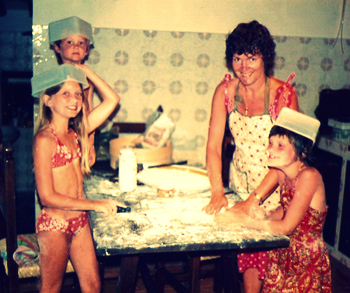 Recently I was very pleased to be asked to write a guest post by the talented Truffle of Cinnamon & Truffle* – the transatlantic food blog of choice at Bibsey Towers – who I would like to thank very much for having me on their blog. If you fancy a tale about food and childhood you can find the post here.

Writing it caused me to consider my relationship with food for a little moment and how it has changed over the years. I would say that I have never had an ‘issue’ with food. Only with moderation.

As a child I suspect that I was similar to a waste disposal unit – hopefully delighting my mum by eating everything that she put in front of me and always nosing about for more. No change there, then. Actually, in our family, leaving food on your plate was not an option. I guess that might have had something to do with my parents being brought up in the post-war era of rationing. I my grandparents were also very strict where food was concerned.

As a student I did the classic yoyo thing of having extremely poor term-time eating (and drinking) habits only to return to the mothership during the holidays to build up my reserves on home cooking.

The only time in my life when I can say that food truly took a back seat was when I lived in Hong Kong. Looking back I honestly don’t remember cooking a single meal (unless you count beans on toast when we were on lock-down after a typhoon warning – great days and fabulous parties) and from what I do remember, I lived on tinned sweetcorn, peanuts, noodles and Heineken. It was a great time in my life, but not the most nourishing.

There followed my time as a girl about London town where I became very, very good indeed at eating out and yet, after more than thirty years of scoffing, still not at all good at cooking. My favourite meal of the whole week was Sunday lunch in the pub with friends. I still miss it. And I miss my lovely lunching friends. 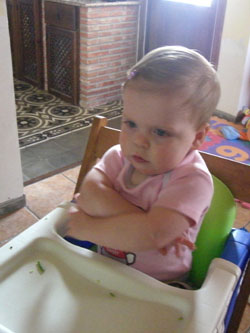 Not another morsel will pass these lips

Then *takes a deep breath* I got pregnant and moved to Spain. Two seismically life-altering events that happened to co-incide through no proper planning on the parts of Mr B and myself. So, now in an old switcharoo of classic proportions, I cook (getting better and better) but I almost never go out.

I have a different relationship with food now I think. Pregnancy in its various stages, and the all-consuming nature of breast feeding and motherhood can’t help but have some effect on on a woman’s eating habits. Suddenly you are not buying or eating just for yourself. And actually you can become not just a little bit obsessed with the food consumption of the little people. Your own requirements can fall a little bit by the wayside for a while at least.

And that my friends, I have found, has taken some of the joy out of food for me. Would anyone else agree? How has your relationship with food changed with parenting?  Do you continue to feed yourself as well as you did when you were pregnant? Does endless food preparation for food-flinging toddlers dull the whole foodie thing for you?