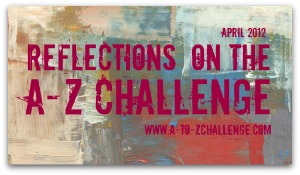 To finally put the (re-sealable) lid on the April 2012 Blogging from AtoZ Challenge, those nice bloggin’ fairies over at Challenge HQ have asked the survivors to write a leedle post to reflect on how the whole thing went. They have even asked for some feedback on how they might develop the challenge for next year.

I did write a post for the letter Y which was a pre-finish line yadda about how the whole thing had been going for me. Mainly, on that day I was tired. Tired but positive. That’s me really. Pretty knackered most of the time, but generally quite up-beat.

So, how was blogging-from-A-Z-everyday-in-April-with-Sundays-off for me?

I think that it may have made a more honest blogger out of me. I had to remove some of the filter otherwise I just wouldn’t have been able to post every day. Previously, I would agonize over a post and wonder what people would think. If it wasn’t good enough then I just wouldn’t publish. I have over 30 unpublished posts in the pipeline – some of them, or parts of them, were quite useful for the challenge – that are mainly out-of-date now, but are unpublished because I didn’t think that they were good enough. Seems a bit of a waste.

When you have a daily deadline and you HAVE to post something, you just do. So, as a result I think that my blogging metabolism has changed. I’m not going to post every day, but I think that I will be writing more than I did before. I suspect that I would miss it if I didn’t. In fact in the last week, since the challenge finished, on the days that I haven’t posted something I have noticed that a little something was missing.

I also feel that the challenge has led me to reveal a little more of myself than I otherwise would. And in doing so, I think I have attracted (if that is the right word) some lovely, funny and encouraging comments from old blogging buddies and new ones. I am sure that I won’t be the only blogger on the block to say that it is the comments and connections, that this challenge has brought, that has made it all worth while.

And of course, as mentioned in the previous yadda, some days for inspiration I had to do some research and this led me to some great discoveries. And I can really see the value in ‘prompts’ even if it is just a letter of the alphabet. When the going gets tough, the tough get googling. And there is SO much out there to discover. Not least of which were the new blogs I found. See my A-Z blogroll on the right.

Note to the organisers: The only thing that I found a bit tricky about the whole thing was the ‘list’. At the final count, there were 1719 bloggers blogging through the alphabet. It was a daunting prospect attempting to find other bloggers via this list. The variety of blog out there boggles your mind. I ended up looking on Twitter for #atozchallenge where at least there might be some words to hook you on to a post. It would make it easier to find kindred blogging spirits if people could somehow sign up to categories at the outset. #justathought

How was it for you?