Yes, that is me, the English woman. La Inglesa. And never have I felt it more than last night.

This weekend is Carnival. And Carmen, the lovely lady at Bibsey’s guardaría, very thoughtfully and carefully explained what was happening. The kids would meet at 5pm at the guardaría in their disfrazes fancy dress and then proceed to the plaza for music and theatre. The theme was pirates. 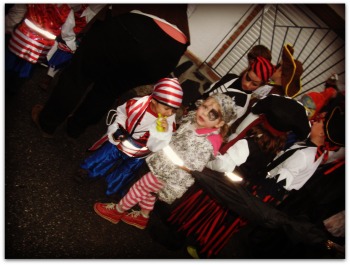 I duly dressed my daughter in stripy leggings and popped a jaunty scarf on her head. Let’s draw a veil over the post-nap protests at being dressed as anything other than Tinkerbell. I had even bought the obligatory eye patch, cutlass and telescope from the Chino Shop in town. It actually took me about 10 minutes to make the purchase because there was literally too many pop-up pirate kits at €2.50 to chose from and they were all so shit that I had trouble choosing the one-on-which-to-waste-my-money.

We arrived at the guardaría in time for Bibsey to have her glittery eye patch painted on and to just generally sit around until I (oh, dunce of a woman) finally clocked that I was the only parent in the room. All other mummies had politely withdrawn. Bibsey was sticking to me like glue BECAUSE I WAS THERE. A few hand signals later and I finally got the message that I should leave. Oh the effing shame when I exited to find ALL  the parents on the street outside (in their costumes – me not).

Did I also mention that all of the kids and parents had on the same costume. I don’t just mean that they were all pirates. They ALL HAD ON THE SAME COSTUME! Where the fuckety-fuck was my memo on the costume? Please thank you.

And out in the street there were groups ALL IN THE SAME, THE EXACT SAME COSTUME. There were gangs of identical pirates and owls and police officers and clowns etc. Some of the costumes were brilliant. If ever I needed to get with a programme… blah blah blah.

Bibsey, meanwhile, had been attached to a line. Literally by a cord. Very sensible actually. All the kids had a detachable high-visibility cord around their waists that attached to one cord.

One cord to rule them all, One cord to find them,
One cord to bring them all and in the darkness bind them. (LOTR true quote that)

And then they desfile parade around the town along with all the other similarly corded children. She hated it.

When I finally responded to her pleas for release (not until she had done a circuit of the town) I detached her from the line and we joined friends in the big tent on the plaza. Did I mention that it was pissing down? My poor poppet then proceeded to hate every single aspect of carnival that she was supposed to enjoy: the marching band, the crazy fancy dressed-up people with their not-scary-at-all-masks-and-wigs, the loud bangs (this is Spain, there are always loud bangs), the crowds, all of it. She hated it. I stuck it for as long as she could and then home. She was begging to go home.

I actually thought that carnival could have been great fun for us, if only Bibsey had enjoyed it. Maybe next year. The icing on this year’s carnival cake for me was the moment just as we reached the car when my little girl said “well that was fun wasn’t it Mummy?” WTF?

When we got home she immediately rooted out face wipes and her Tinkerbell outfit and proceeded to de-pirate herself in the only that she knows how: dancing to a bit of My Fair lady. That’s my girl. Wash that pirate right out of your hair.

I couldn’t have loved her more, even though she was a right monkey to get into bed. A bit like Eliza Dolittle.

As for my own performance? La Inglesa? Must try harder. Must get with the programme. Must not fall short of fancy dress expectations. I got away with it this time. And even though I thought she was la más guapa priata en la plaza, and I know that this is all bullshit and not important in the grand scheme, it might be to her one day, so I will try harder.

Has anyone else had similar experiences? I imagine that this is not an exclusively expat trap. I would love to hear from you. Might make me feel better.