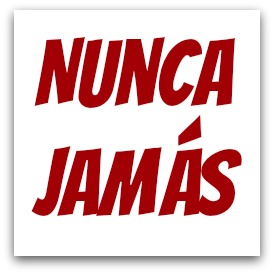 I am the kind of girl who does not like to say never, ever. If you would ask me if I would ever go back to England to live my answer would probably be nunca digas nunca jamás.

In my misspent youth I was never the type, when hungover to the eyeballs or with my head down the toilet, to utter the famous line I’m never drinking ever again. Even in those moments it seemed like a pretty silly thing to say. Even about Tequila.

It may be though that I have finally found something upon which I can happily and liberally sprinkle nevers and evers. That is making paella. I tried it last night. Mr B was out so why I wasn’t just making the most of not having to cook for someone, and just grabbing a bowl of cereal and the iPad, I don’t know.

I just decided to give it a go thinking that it might also be nice the next day…  it wasn’t very nice, I only had chicken to hand, and the rice was a bit undercooked. I was as sick as a dog last night and this morning. Both ends, in case you were wondering. I don’t think that it was actually the dreadful paella (I think a caught a bug of Bibsey) but, given the epic and violent nature of the sickness, I am sure that I will never be able to face it again ever. When I think of it now I am put in mind of Sponge Bob Square Pants and I don’t know why. Do you know why?

Today I have managed a couple of dry biscuits (sin azucar – don’t ask. Mr B bought them and they have been in the cupboard for months) and a piece of toast. I have been a useless human and mummy and am only now, as the sun goes down, feeling any better. But it is an early night for me.

I am limping through the alphabet on the Blogging from A to Z Challenge April 2013. Thank you for reading and if anyone wants my paella recipe…

What would you say never ever to?