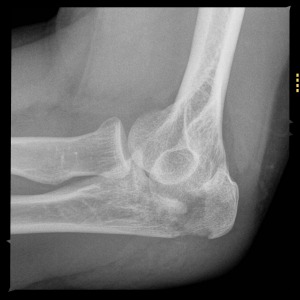 This is not my elbow or x-ray but the closest to it I could find. Click image for source.

Soooo, the elbow thing turned out to be a little more serious than first thought… the thing was in fact broken. And of course it is my right arm.

Since we last spoke I have been over night in hospital and under the knife of a rather nice surgeon who put my arm back together with a pin and what sounded like a chiseling hammer. Yes, that’s right, though heavily and dreamily sedated, I was awake and could hear all the tapping and stapling.

I shall be setting off the alarms at airport security until the end of my days. I am now bionic, as my friend Mr Rouge put it.

SO FROM THIS MOMENT ON, UNTIL FURTHER NOTICE, AND WITH MY APOLOGIES,  I WILL MOSTLY BE TYPING WITHOUT CAPS (except perhaps for proper nouns – can’t let standards drop entirely can we?). PLEASE ALSO EXCUSE TYPOS AND BREVITY, ‘COS TYPING WITH ONE HAND IS AN ARSE-ABOUT. TOTAL.

ok. so you have heard about the pins. now hear about the needles. obviously there were loads. hospital ain’t hospital without needles, right? the worst of all these where the needles used to administer anesthetic to my arm.

these three (i think it was three) needles are like Genghis, Atilla and William Wallace all rolled into one forming an unholy triad of nerve-twanging, tear-inducing sensory nonsense know in medical circles, i read on the internet, as the BRACHIAL PLEXUS BLOCKADE. sounds historical. is hid-e-ous. is like someone playing on your tendons like a banjo. you have one person (suspect was a doctor) on needle-in-the-armpit duty (guided by ultrasound) while another (Nurse Ratched naturally), holding some kind of dial, turns the amplification up to 11. i didn’t understand it and they didn’t explain it. and franchement at that moment i didn’t want to know.

enough of this bone-cracking detail now! before i set all your teeth on edge. what i do want to say is that all of the doctors and nurses – yes, even you Ratched – were brilliant and kind and efficient. oh and the sedative was lush.

MEDICAL BODS OF MOTRIL, THANK YOU FOR FIXING MY ARM.

erm, sorry if i am/have been a bit slack with replying to comments or with leaving comments elsewhere in blogland… am finding even the thought of typing exhausting… *sinks back in chair. arm elevated*

anyone else have stories of cracked bones to share? any doctors out there who can explain the BRACHIAL PLEXUS BLOCKADE?