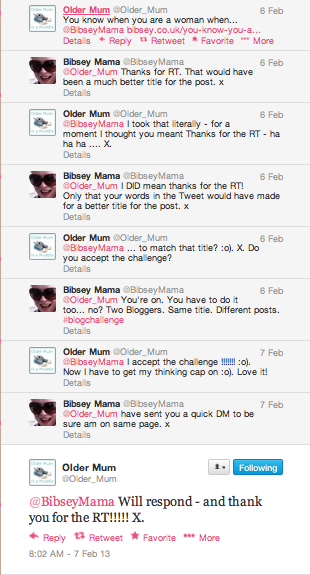 Yikes. So many messages of not-more-than-140-characters and still I am not sure if I have got the right end of the tweet.

So my buddy in blogging, Older Mum in a Muddle (read her blog or die trying), and I got into a little 140 character muddle over an RT* that went a little something like this. Eyes left people. Read the tweets and weep…

The challenge is for us both to write a blog post entitled ‘Thanks for the RT’. Do you see how I have reneged on the title already. Crashed through the first hurdle. Rubbish aren’t I?

Anyway… I did a bit of research and was quite gobsmacked by the number of other posts out there on the web with the same title. There is even one that offers 30 ways to say thank you for the RT.  Read it and weep again.

So, to meet the challenge, as laid out left, I offer up the following:

Five ways to say “Thanks for the RT”

1. Follow the Retweeter.  Sounds too easy doesn’t it? To do this you are going to need to find out where they live or at least where they work. Then you could follow them home. I suspect that you may need to keep a respectable distance just to begin with. Perhaps limit yourself to the privet hedge in the front or nose pressed up the kitchen window at night. Who wouldn’t feel appreciated by that kind of attention.

2. Return the favour. Trawl their stream (I don’t even know what I said there) for juicy tweets and then reheat – I mean retweet – et voila you have a reciprocal retweeter for life. Or for as long as you stay engaged and engaging. Channel (yes, I am thinking Coco, not the body of water between England and France) Madonna if you are in need of Reinvention.

3. You should go bigger and better. This tweeter retweeted your tweet FFS. You should at least send them a fruit basket or spa vouchers. You have their address afterall since you followed them home. If not a fruit basket, maybe something a little more personal. No bodily fluids though. This is the stuff that injunctions and prison sentences are made of.

4. Surprise them by taking their kids out for the day without telling them. I know some mummy bloggers who would really love the ‘me time’. Drop them back before the ‘joy of teatime’ obviously. You don’t want to be crawling under the table bumping your head and picking up bits of sweetcorn and tuna goop. That’s a mummy’s job.

5. Ask them how ‘their’ day was. There is nothing worse, after a hard day of tweeting, than to be expected to drop your iPad in favour of conjuring up dinner from literally nothing (no time to shop when there is serious tweeting to be done) and then performing wifely duties (including, though not limited to: washing, snack making, sock sorting, wine pouring, ego stroking and any kind of stroking for that matter), only to find that you have NOT  been thanked for your RT. Your retweeter will really appreciate your kind concern.

I hope that this was instructive. Ha ha. The very idea that I, one of the Great Twitter Clueless, should give advice. I wait breathless to see how la guapa Older Mum in a Muddle will respond. Although, in truth, the whole endeavour is hardly ‘life or death’…

Please, please do add in the comments the ways in which you would say “Thanks for the RT”. Or indeed please Tweet and Retweet in an unbridled fashion. I am sure that we would all benefit.

Oh, and in case you were wondering… Yes,  my dying tweet:

* Hi Mum. An RT is a retweet. That is when someone republishes your tweet to their followers on Twitter. In this case I tweeted a link to a blog post that I had published and Older Mum retweeted it. She’s lovely. Hope that is all crystal now.