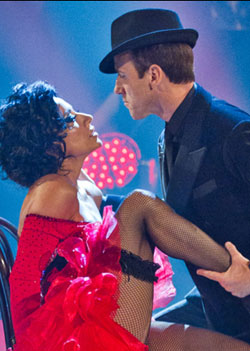 Argh! It’s week 3 and I am struggling to keep up with SCD coverage and at the same time avoiding twitter spoilers. Ach never mind. As long as I have got the general gist I think that I will fine. I am not normally one to let such minor details as having first hand knowledge of a subject get in the way of pontificating about it…

And so it is starting to happen, as it always does. Characters, who hitherto I could not abide, have been rendered palatable, likeable even, by the ballroom… Valance, some arrogant footballer with ridiculous hair, Nancy Dell’Olio FFS! This is the power of dance and spangles. Pretty soon it will be love.

So, here are my uninformed Week 3 pronouncements:

Great expectations: I suspect that this is what Holly might be suffering from. When you look like she does, everyone expects you to be able to dance, and well. And she did didn’t she, but actually for me her cell block tango lacked a bit of bite.

Dobbo watch: What a smile! This week she may have been all character over technique but who cares… erm, Revel Horwood. Bless her. I love Dobbo.

Jordan and Jones: She was even better this week. Simple and beautiful and lovely arms. 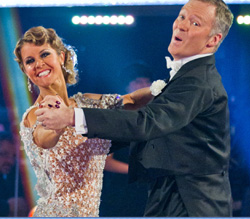 I am still loving: Rory, who finally got a “brilliant job” from Craig for his quick step. Erin looked amazing in that dress. My dress of the series to far.

Scariest training footage: Lulu losing it! But what an improvement  Who cares about the illegal lift… erm, Revel Horwood. Inspired music choice: Dancing a rumba to Phantom made it more romantic than sexy (best way to go with Lulu right?) and it worked.

Dell’Olio embroglio: Still hanging on by her talons despite being bottom of the leader board. For me – but not most of the judges apparently – finally the dress, music, dance and character came together and there was a glimmer of something there. Something a bit like panto. But such low scores! Ouch.

Audley Schmaudley: Really not seeing anything there to laugh or cry about. 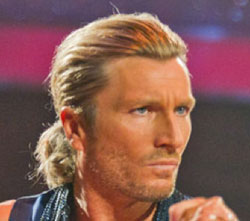 Best Tango face: The award goes to the footballer with the silly hair. Seriously, he is doing well, right?

Guilty pleasure: Russell is Alicia’s guilty pleasure. He might be mine too. We could have been forgiven for putting Russell in same dance class as Widdecomb and Sergeant at the start of term, but now? He is really dancing out there. And oh much is he loving it?

ITT quote of the week:
Ball: Craig, how can Rory improve?
Revel Horwood: By being more talented

And now, if you wouldn’t mind, answer me this: Who do you miss from previous series?

I used to love watching Kara Tointon and Rachel Stevens. Speaking of which, I am missing Vincent already. I hope that we get to see some Argentinian Tango from him and Flavia later in the series.