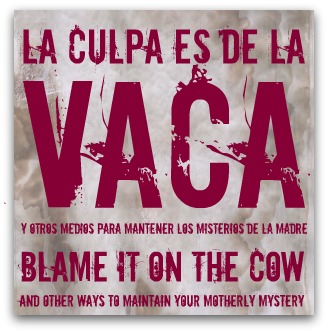 This week’s 7 Word Challenge was inspired, and not a moment too soon honestly, considering that my back-up post in uninspired times is about kitchen utensils, by an incident that occurred in the kitchen this morning. For the sake of my blogging “craft”, and in the good old time-honoured tradition of Arse Posting, I am bound to admit that I let rip a huge fart un gran pedo this morning to my audience of one. Bibsey looked past me and with some consternation said “There’s a cow mummy”.

Who did invite that cow for breakfast? This remains a mystery. But one thought led to another…

On exploration, it would seem, the internet is awash with advice for women on how to maintain their feminine mystery and keep romantic relationships fresh and exciting. What I would like to know is where is the advice for mothers on how to keep their mothering from getting stale?

As a mother, how do you retain an air of mystery for your children in order to keep them spellbound and obedient? Their very entrance into this world is via one of the most mysteriously loaded passages know to man. They have literally seen it all. And it is down hill from there isn’t it? From the moment they are born, they pretty much follow you everywhere. Nothing is sacred. With that as a given, and hackneyed Cosmopolitanesque relationship advice as a guide, I give you: La culpa es de la vaca and other way to maintain your motherly mystery

1. ¡La culpa es de la vaca!  Blame it on the cow!
I think that the more common phrase is la culpa es del perro. Isn’t that what people do, blame the dog for errant farts when in nice company? Who am kidding? I caught Bibsey off guard with my little slip this morning. At any other time she is on high alert to other people’s bodily functions. There is nowhere to hide. 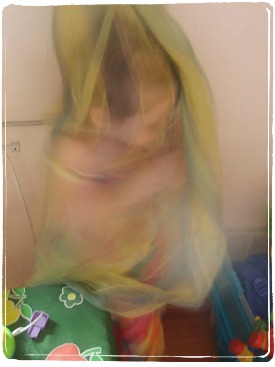 God forgive me, because she never will. Here is Bibs off in poo corner having a quiet moment in a nappy and wrapped in a curtain. She likes a private poo but is no respecter of the private poo for others.

2. Hacer una caca en privado  Go for a poo in private
Shut the bathroom door? Yes, because nothing shouts mystery louder than a hysterical two year old screaming blue murder, and hurling themselves at the closed door with you barricaded on the other side of it, with your cheeks clenched with the tension of it all when what they need to be doing is the exact opposite. This is kindly, but ultimately useless, advice. Almost insensitive in its uselessness.

3. ¡Estar más aventurero en… la cocina!  Be more adventurous in… the kitchen!
As with men, so with children. The way to their hearts is through their stomachs… but Fanny Craddock I am not, and I beg none of you to take culinary advice from me. En mi casa we operate on a strict revolving menu of omelet, pasta, fish fingers and sausages. I suggest a quick trawl of Pinterest for those who want to up their game in the kitchen.

4. ¿No tienes nada mejor que hacer?  Haven’t you got anything better to do? or ¡Obtener tu propio vida!  Get a life!
We are told that for men their is something mysterious about a woman having her own life. Erm, let’s dwell on that statement only long enough to mention that women find it rather gratifying too. And now let’s apply this to our children:

My mum has a life of her own? What, like interests and activities beyond the home? Socialising and shit? Yes, because the world doesn’t revolve around me. No wait, it does! Yup, I am pretty sure it does. For about 33 years! Minimum. You get me?

5. ¡Sorprendelos!  Surprise them!
That’s right, throw your toddler a curve ball and just hope that it doesn’t smack out their two front teeth. During the scant research that I did for this blog post I found some advice on how to add an element of surprise that I feel I must share. It’s stunning in its simplicity and I do believe that your kids, if not your husband, would love this new surprising you if you GET UP BEFORE SUNRISE TO RIDE HORSES with them. Some may prefer unicorns (you may know who I mean) but the principle would be the same.

6. Convertirse en un lector de la mente  Become a mind reader
Just recently it seems like a lot of the things that I do upset Bibsey deeply. She wants my help, she doesn’t want my help. She wants to watch Innie My Pooh, but not this episode. She’s hungry but I have put the plate with her fruity snack in the wrong place and now all the food must be tipped on the floor. How much easier would it be if we could all read our toddlers’ minds? Imagine what a show stopper you would be if you knew what they wanted to wear, if you could anticipate their every dietary whim, if you were aware that the pile of crap in the middle of the floor was not just a pile of crap but a carefully constructed alternate universe that would do better if you didn’t tidy it up or put it in the bin. Imagine… sign up for classes below. I need the cash.

7. Utilizar artimañas femeninas Use your feminine wiles
I give up here. I wouldn’t know a wile if it hit me in the face. And honestly sometimes a list of 7 is just a bridge too far. I’ve talked some rubbish on this blog in my time but I draw the line here. I’ll try batting my eyelids at Bibsey tonight, when she is crawling around under the table terrorising the ants instead of eating her tea, and I’ll let you know how I get on.

I seem to have strayed from my true path of learning Spanish here, but should you like to comment on the whimsical idea of retaining your mystery with your children (or your husband) please do. And, if there are any mothers out there who get to go to the loo en privado I salute you.