We have just come through the other side of 24 hours of sick chick. I’m not sure exactly what was up with my Bibsey, but is started with a runny bottom, continued with good deal of vomit and finished with a very unhappy little girl. She is back on form today, but yesterday was bad, following a bad night. It was the first time in ages that I really had to stay with her all night. Oh, the joy and pain of co-sleeping. 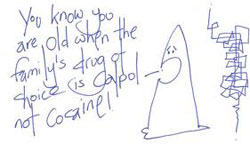 Calpol: the sung hero of the medicine cabinet

Since having a child I have noticed how much I tend to quantify things – how long did she nap, how much milk has she drunk, how many poos has she done and when was the last one, how many bottles of cava do we have in the fridge and of course the big one: how many hours until bedtime? All this seems to intensify when that child is sick. Every part of the day, all activities are counted out, measured or timed.

Here is the commentary on some of yesterday’s figures. Just some top line stuff:

Well, to start with 1 sick and grumpy child, knackered after a crap night’s sleep – although 3 consecutive hours of sleep may have been achieved somewhere between the hours of 2am and 6am. By grumpy I mean catastrophising EVERYTHING and lying face down on the sofa crying her eyes out into the cushion. I felt so sorry for her and utterly exasperated at the same time.

By sick I mean she ran a mild fever of 38.2 (nothing dangerous but still, pobrecita) and we spent the day hanging out for the next dose of Calpol – that would be 2 doses of 5ml, 6 hours apart. The Drugs Do Work.

During the last 24hr period 25 ounces of milk went in. We have no data on how much came out… spewing out. Not a great deal of food consumed and even less retained. 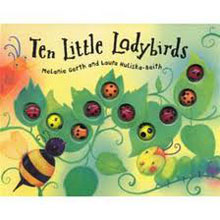 Or as we like to say here in Spain, Diez Pequeñas Mariquitas

I am afraid accounts of how many episodes of Charlie and Lola were watched have been somewhat fluffed. In fact I dread to think. But suffice to say when we weren’t reading stories about poor defenseless creatures getting themselves into terrible scrapes, we were watching back-to-back Charlie and Lola en Inglés and en Español. It was the only thing that would distract her from her sick self.

She took an uncharacteristically long afternoon nap of 2 1/2 hours. Clearly much needed but a disaster for bedtime which took 2 hours! The temperature in the bedroom at bedtime: 30°.

And there you have it. All’s well now. Not scintillating bloggery granted. Just my account of Bibsey’s sick day. Poor adorable sick little poppet thing.

Oh, and I have found that nothing else screams to me ‘YOU ARE A MUMMY NOW’ quite so much as reading The Tale of the Flopsy Bunnies to my sick little bunny. I think I love her even more after Sick Day, if that were possible.