Every too often there comes a time in a woman’s life when she has to lie back and ‘juuust relax’. A couch is provided and children are discouraged. Sounds great doesn’t it? Pas vraiment. Yup, not really at all. 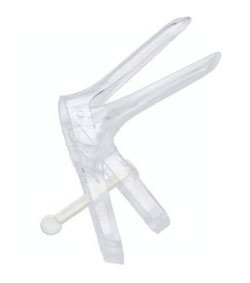 I am talking of course about the least relaxing activity of them all: the pap smear test.

I had that pleasure last week. My first smear in Spain. It is one of those necessary evils in a woman’s world that she just has to grin and bare.

Up the mountain here in Spain it was a right old rigmarole. First of all you cannot just make a call to organise the appointment. You have to see the doctor, who then makes the appointment with the nurse. To the see the doctor you have to go to the consultorio and wait in line. The line in Spain being something that I have yet to fully understand, but have spent much time researching.

This much have learnt:

On entering the waiting room greet the assembled company with an ¡hola todos! This is will get you off on the right foot and should be followed up with ¿Quién es la ultima? To establish who is ahead of you in the queue. It is just as important to let newcomers know where you stand in the queue with a Soy la ultima.

So far so good? Ha! You’d think, but just when you think that you know how many people are in front of you in the queue a couple of abuelas will turn up and sneak in to their seats ‘in front’ of you. They have friends in the queue. It’s like the Wild West. I take a book. War and Peace would be about the right number of pages. Or Lord of the Rings.

Anyway, on my smear test day (grim phrase), I did finally did get into the nurse’s room after about an hour, only to be faced with yet another hour of paper work! Our nurse’s name is Paco and he really is a very nice man who has been working in our village for many years. He had to ask me a bunch of questions about periods, pregnancies, childbirth… all questions that I KNOW I have answered before. All answers that I KNOW they could find on the ‘system’. I have given birth here after all. However he had to put it all down on endless forms on paper (photocopies of photocopies of photocopies so faded that he could hardly read them). He was as vocally grumbly about the paperwork as I was feeling. 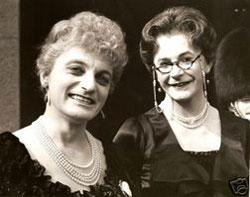 Just pop your frock off my dear and jump up on to the couch. This will only take a minute

Finally, with all the waiting and bureaucracy dealt with the doctor and nurse (both lovely gentlemen) actually took the sample. You know the drill, so I won’t get graphic. I did my usual mental ‘just pretend that you aren’t here’ trick which was oh so useful during childbirth. Hah! It was a bit of a performance – and by that I mean it wasn’t speedy, and not that it involved a live band and jazz hands (ha ha can you imagine? “ok, all done, just pop yourself off the couch and get dressed” *jazz hands*). But they were methodical, careful and kind. It was a bit like having your smear test done by Hinge and Bracket, if anyone remembers them…

So, that is that done and dusted for another three years (I hope).

Now to lighten the mood, and to give this post some kind of purpose, I have taken inspiration from a band of bloggers who have been having fun on their blogs recently by editing photos to within and inch of their lives and then posting the before and after shots.

Here I hope to divest the smear test experience of some of its mystery and ‘power’ with my ‘treatment’ of the hated speculum. Let’s just say that it is in the same spirit as imagining your boss on the toilet as he/she is dressing you down in front of colleagues in a meeting. 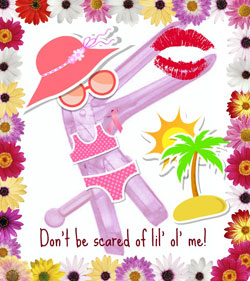 Next time you are on the doctor’s couch awaiting the dreaded speculum, just think of Lil’ Ol’ Me pictured to the right here, on her hols far far away from me, and have a little laugh. Who knows, it might help you relax… onwards and upwards ladies.

Now, has anyone got any war stories to share? Perhaps we could all link-up to do a feature about smear tests all over the world… any takers? No?

I am linking this post up with the aforementioned merry Band of Bloggers, otherwise known as the Snap Slappers hosted every week over at Five Go Blogging. They like to slap effects on their snaps. Now I am not sure if I actually qualify because the original shot of the speculum is not mine (yes, it’s true), but I think that my slapping on of effects is worthy of the link-up don’t you?