Well, we (Bibsey and I) made it to Wembley! Not physically of course, but on the blog. *gushes* I can’t believe that we have made it so far. It has been an amazing journey and yet we still haven’t learned how to dance. We don’t dare to think about the final at this stage. We just take it week by week and go out there and try to enjoy it.

A massive audience. Huge! The biggest in SCD history . The celebs must have all been crapping themselves. Now, before I crack on, let me not forget to mention that blogger Melksham Mum was actually THERE! And she wrote about it HERE. I am of course green, green, green as I was watching it in amongst the potato peelings as per usual.

Beau Savage: Salsa? Not so much. But they opened the show with a bang to Let Me Entertain You and vintage Ola in a catsuit. And they did: entertain us. The Beau – self-confessed most hated man in football – said that the experience was better than Carling Cup Final (whatever that is…) and he came over all tearful on Claude’s sofa. Votes! Tears make votes!

Jones and Jordan: Tangoed to Relax and … it was good. She was sharp and fierce and her makeup was stunning. They topped the board and James’ little speech of love can’t have harmed the votes much right?

Dobbo watch: Oh how I do love them and how they bounced back from the bottom two of last week. But not quite in the samba groove. Is it just me? Or does she not extend her legs or point her feet? Just saying. Still love her. Dobbo for Queen! Argh did you see what I did there? (It’s a Queen gag Mum) Anyway, you know that you are in trouble if Bruce asks YOU if you would like to be his favourites. But yay, despite the not so great scores they are through and Dobbo is happy – ‘like a little pony’ on Claude’s sofa.

Helloooo Harry: Open shirted for the salsa… didn’t go unnoticed. And we don’t mind here at Bibsey Towers. Not at all.  Bruno offered some technical help for his bum… as he was somewhat lacking in the hip action. 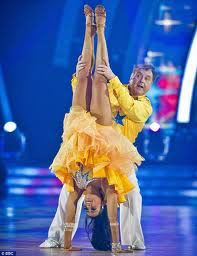 Flav and Russ: Doing the jive (but not so much), looking for all the world like two dancing canaries. Canaries doing their swan song as it turned out. And the canon stunt entry (not a phrase that you want to trip over): OMG words fail. Craig managed one:  ‘revolutionary’. Bruno gave the highest score of 7 ‘for the insanity of it’.

Sweet Chelsee: Dancing her little samba socks off as usual- puppy-like and joint leaders at the top of the board.

No 10 for Donovan: Ooo they wanted to 10-him-up for his jive so badly this week didn’t they? But there are no prizes for forgotten steps. Not in this game. Eh Brucie?

Moment of the show: Queen Craig (and co) ‘popping’ out of the phone box during the Beatles Extrav, looking for all the world like he had been snorting something off the back of the Beatles White Album. He was going for it!

So that’s it for another week. Farewell to the ‘Insanity’ and only the serious remain in the competition. I am feeling pretty torn… how about you?