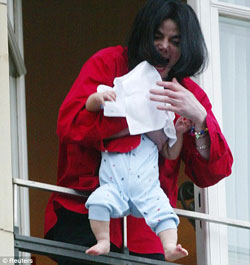 Hmm. It has been a while since I last wrote about the dreadful things that I have done (or let happen) to my baby. So long in fact that my baby is now more like a little girl. As they grow I guess so does a certain amount of complacency within mums and dads. Where I used to hover and over protect I now I have a much more laissez-faire attitude with potentially disastrous results. Yesterday before we had even got to 8.30 am two things had happened:

#1. Early in the morning Bibsey threw herself out of the bed and onto the tiles. She and I were in the spare bed by the cot in her room. She’d had a bit of a wakeful night (did I mention that she had started to sleep through?) so I had taken her into the bed with me in the hope of getting a couple of hours more sleep. Ha! One second she was in my arms and the next she was gone. It was pitch black, as the shutters were still closed, and there was a moment of utter confusion before the howling started. I was on it immediately of course…. groping around in the dark trying to work out which way was up, where her head was, was she broken etc. Thank the Lord and all his Heavenly Angels – she took the pillow with her as she went and it must have entirely broken her fall. She was completely ok, just a little surprised.

And who says co-sleeping is dangerous? I know what she was up to. She was after the bedroom unit of the Angel Care Baby Monitor, little monkey. It doubles up as a nightlight and temptingly looks like a little angel on the bedside table.

Time to rethink the set-up in her bedroom don’t you think? Perhaps some foam alphabet tiles on the floor or a rug even?

#2. Later that very same morning. She was sitting beautifully in the sofa eating a dried apricot and watching Charlie and Lola on Mr B’s little Netbook, which was placed (temptingly again) on the table next to the sofa. In a blink of an eye she was gone. All that could be seen of her in eight little fingers clinging onto the edge of the table for dear life. While I was blinking (I wasn’t being hilarious on Twitter or leaving rude comments on other people’s blogs, honest) she had made a bee line for the Netbook (a rather dinky and groovy little gadget that she is not allowed to play with) and had fallen into the gap between the sofa and the table.

Again, thankfully, there was not a scratch or even a bump on her. We had tears of course. And I felt dreadful por supuesto. So, yet more rearranging of furniture required and general rethinking of what parental care entails.

I do love the fact that she managed to hang on though. Feisty little nutter. 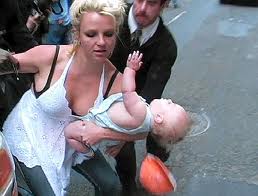 If you too have any Britney Spears moments in the closet I urge you to share them with me. To make me feel a little better about myself.