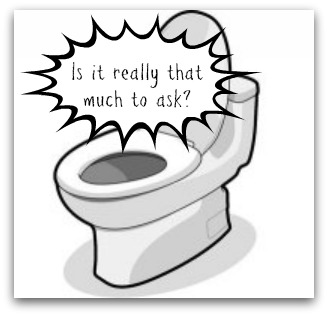 There is this post doing the rounds of facebook at the moment entitled The Man Rules. It is written by a man/men and is, I imagine, some kind of a response to the better known, and equally ridiculous, The Rules as written by a woman. The latter being some old cobblers about never picking up a phone to call a man and making him wait until hell freezes over, or your vagina closes up (whichever comes first), for sex in order to get him to put a ring on it. Like that is all that we have going on in our pretty little heads anyway, right girls?

The former bunch of cobblers, The Man Rules, includes such gems as:

Anyway, putting such haute brow accessories aside for one moment, I would just like to take particular issue with the following:

“Learn to work the toilet seat. You’re a big girl. If it’s up, put it down. We need it up. You need it down. You don’t hear us complaining about you leaving it down”

Franchement, where to begin… OK

Oh, and while we are on the subject, can I tell you what I want, what I really, really want? I want you to put the seat AND THE LID down. But I don’t go on about it. Poco a poco. Baby steps, eh?

*Facts have been checked. And this has been allowed by the man himself. While he will of course use the loo brush to remove immediate offending articles, long term care, with chemicals and Marigolds, are not his province.