I was really pleased when I saw this writing prompt from Spanish expat in Holland, and trilingual blogger of Tales from Windmill Fields, and thought that it would be a great opportunity to join in with the  Xpat Blog Hop. This week expat bloggers are writing about: Lingo. 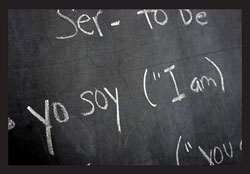 Mr B and I decided to leave London to go and live somewhere laid-back and sunny over a Sunday lunch in the Hoxton Grill. He was gunning for France – he speaks a little of the lingo and had lived there before. I was all up for Italy – I have a love of Italian food and fond memories of many Tuscan holidays growing up. I also have ‘O’levels in both languages – both so far past their use by dates as to be counted irrelevant to the decision making process.

In the end we went for Spain. Do you see what we did there? We went for the best of a completely different world. Between us we had barely two Spanish words to rub together and next to no actual time clocked up in the country to back-up our decision.

It would not be understating it to say that Mr B are worlds apart when it comes to our  approaches to learning the lingo. I set to work immediately using free online resources***, downloading podcasts and taking conversation lessons. Mr B’s method relies more on the process of osmosis and drinking beer with the locals. There is a bar stool somewhere in France with his name on it. No, really, there is.

Just to add to the suck-it-and-see-while-flying-by-the-seat-of-our-pants nature of our move to Spain, we discovered I was pregnant only days before we left the UK. And I guess pregnancy, childbirth and motherhood have put me on a slightly different path to learning the language than the one I had envisaged. 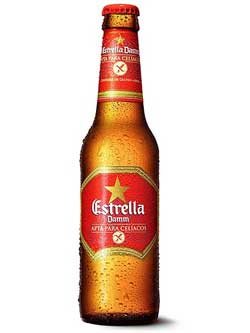 Where I might have been chatting-up locals over cervezas and tapas, I found myself struggling with my Andalucían midwife over the basics of prenatal care. My struggles continued at the Ayuntamiento, antenatal classes, in the labour ward, in the shop, on the street, at the doctors, organising my ITV etc. I have been to college in the city, had private lessons, indulged in intercambio and spent hours plugged into my MacBook Pro watching episodes of Anatomía de Grey and Mujeres Desperadas with subtitles. A multi-pronged attack you might say.

My  Spanish should be better, but it could be so much worse. And my ability to speak Spanish varies from day to day depending on how I am feeling. Today, for example, I found the simplest exchange in the post office quite beyond me – could that have something to do with the fact that I have been up half the night for the last four nights with a sick Bibsey? When I was in labour I amazingly managed quite well speaking to the midwives, but the next day completely failed to communicate with a rather impatient nurse which was very upsetting.

As Bibsey grows up and starts guardería the challenge to move up a gear with the language is very much on. The key of course is opportunity and a willingness to get out there. As an expat SAHM I have to create those opportunities and push myself out there whenever a chance presents itself.

For those who are interested here are a few of the resources that I have found incredibly useful in learning Spanish.

Studyspanish.com is a great website offering free and premium tutorials and great for grammar reference.

Coffee Break Spanish I started here, listening to their podcasts on the way to work every morning.

I found the Michel Thomas cds really helpful once I already had some Spanish under my belt. Great for listening to in the car.